[su_heading style=”default” size=”13″ align=”center” margin=”20″]Since Twitter burst onto the social media scene in 2006, it has introduced many new and exciting tools to the social media marketer’s tool box. However, of all the things that Twitter has brought to our lives, it is fair to say that the hashtag has been one of the most influential.[/su_heading]

With the term recently being introduced into the Oxford English Dictionary, it’s safe to say that hashtags have firmly cemented themselves as one of the most popular and important social media tools of the decade.

Despite their overwhelming popularity, there is still a large amount of people who don’t fully understand how to harness the power of the hashtag. If used correctly, hashtags have the ability to make your business more visible on social media than you could have ever imagined so getting to grips them is absolutely essential.

What is a hashtag?

The hashtag was first used 2007 by technology innovator, Chris Messina in a tweet which said; [su_quote style=”default”]“how do you feel about using # (pound) for groups. As in #barcamp [msg]?”[/su_quote]

From 2009 onwards, Twitter began to hyperlink all hashtags used in tweets to Twitter search results for those terms and the hashtag as we know it was born.

So what is the point of the infamous ‘#’ symbol? The simple explanation is that the hashtag is used to group social media conversations together.

There are thousands of conversations happening on social media at any one time and the hashtag creates an easy way to search and keep track of these conversations.

Any word, sentence or phrase can be made into a hashtag provided that it has no spaces or punctuation marks. However, just because you can make anything into a hashtag doesn’t necessarily mean that you should. There are certain hashtags that will make your tweets more visible than others and those are the ones that you should be aiming to use.

How to use hashtags

One of the main reasons businesses use hashtags is to connect their brand with popular topics and to reach people who could potentially become customers. In order to do this successfully, there are a few key things you should always keep in mind before pressing that send button.

As already mentioned, you can turn almost anything into a hashtag. Nevertheless, it is key that you select words and phrases that are neither too broad nor too specific  to reach the most amount of people possible.

For example, if you are a travel agency tweeting about your new holiday offer, using the hashtag ‘holiday’ may seem like a good idea. However, thousands of other brands are also using this same hashtag meaning that your tweet will easily become lost.

Similarly, picking a very specific hashtag is also a mistake. You need to make sure your hashtag is a popular enough term that people will actively search for it, otherwise, the numbers of people who see your tweet will be much smaller than what they have the potential to be.

When it comes to using hashtags, research is key. Simply typing a hashtag that you are considering using into the search bar will let you know just how often the hashtag is used. This is a great indicator if whether you should incorporate a particular hashtag into your post or not.

It is well worth taking the time to research the hashtags specific to your industry. There are numerous specific industry related hashtags that can help your tweets become part of a much wider conversation and knowing about them is essential. For example, #irishbizparty is an extremely popular hashtag used by Irish businesses while #contentmarketing is a popular hashtag used by those in the PR and social media industry.

[su_quote style=”default”]There are numerous specific industry related hashtags that can help your tweets become part of a much wider conversation and knowing about them is essential. [/su_quote]

Similarly, certain days of the week have specific hashtags such as #traveltuesday #throwbackthursday and #foodiefriday – these, and other hashtags like them, are great for reaching a wider audience who may not have necessarily seen your tweet otherwise.

Creating your own unique hashtag is another popular way of marketing your business as it allows your customers to create a conversation specifically about your brand. However, before creating your own unique hashtag, it is wise to make sure that your hashtag is not already being used by anybody else. The last thing you want is to advertise your unique hashtag to your followers only for several other brands to be using the same one or, worse still, for your hashtag to be involved in a controversial conversation that you don’t want your business associated with. 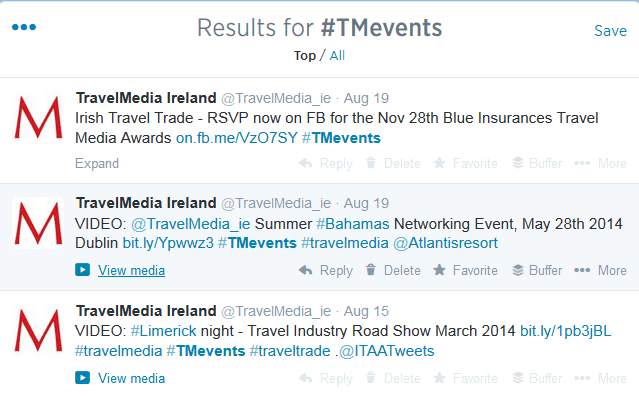 Although it may seem tempting to include as many hashtags as possible in your post, this is never a good idea.

Using too many hashtags can be annoying and confusing to your followers and can mean that your post gets less interaction.

Hashtags should always add value to your posts and positively contribute to their visibility. Using one or two well researched and well-targeted hashtags is always far more beneficial than over-loading your posts in the hopes that your tweet will appear under multiple search terms.

Would like to learn more about to make hashtags work positively for your brand? Contact a member of the TravelMedia.ie who will be happy assist you.