Known as las afortunadas (the lucky ones), the Canary Islands are a region blessed by sun, sea and stunning scenery. And with that comes breath-taking beaches which boast clear blue waters and unique landscapes.

Read on to hear about the top ten beaches in the Canary Islands: 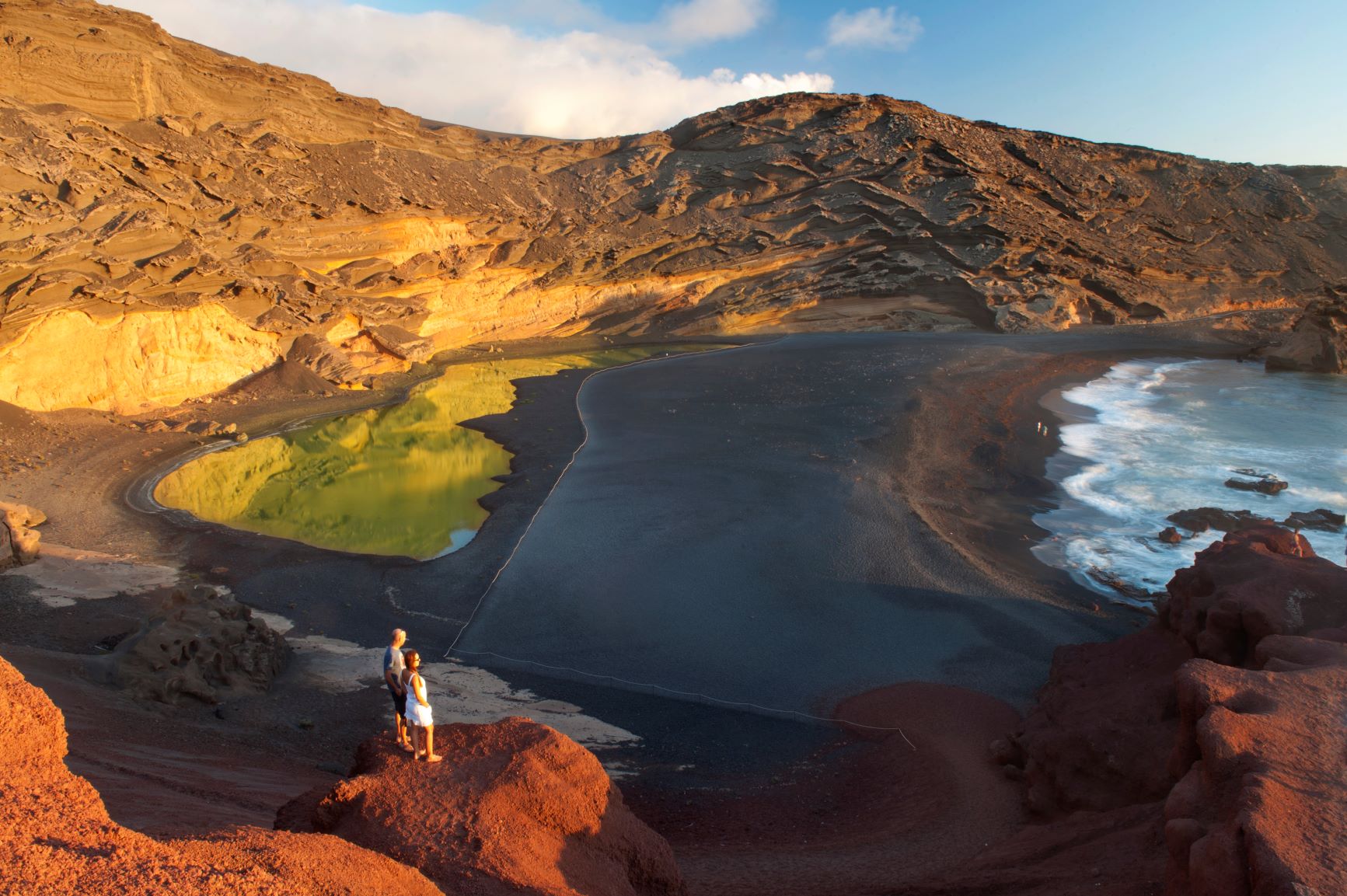 This impressive beach is made of black lava pebbles. The cliffs behind the lagoon are equally dramatic, having been wind eroded into distinct shapes over the course of the centuries.

The beach is also known for its green lagoon – the Lago Verde, the water of which is a stark contrast to the black sand and red, orange and yellow backdrop of the area.

This unique natural feature of Lanzarote is a photographer’s delight.

Beaches in the Dunes of Corralejo, Fuerteventura 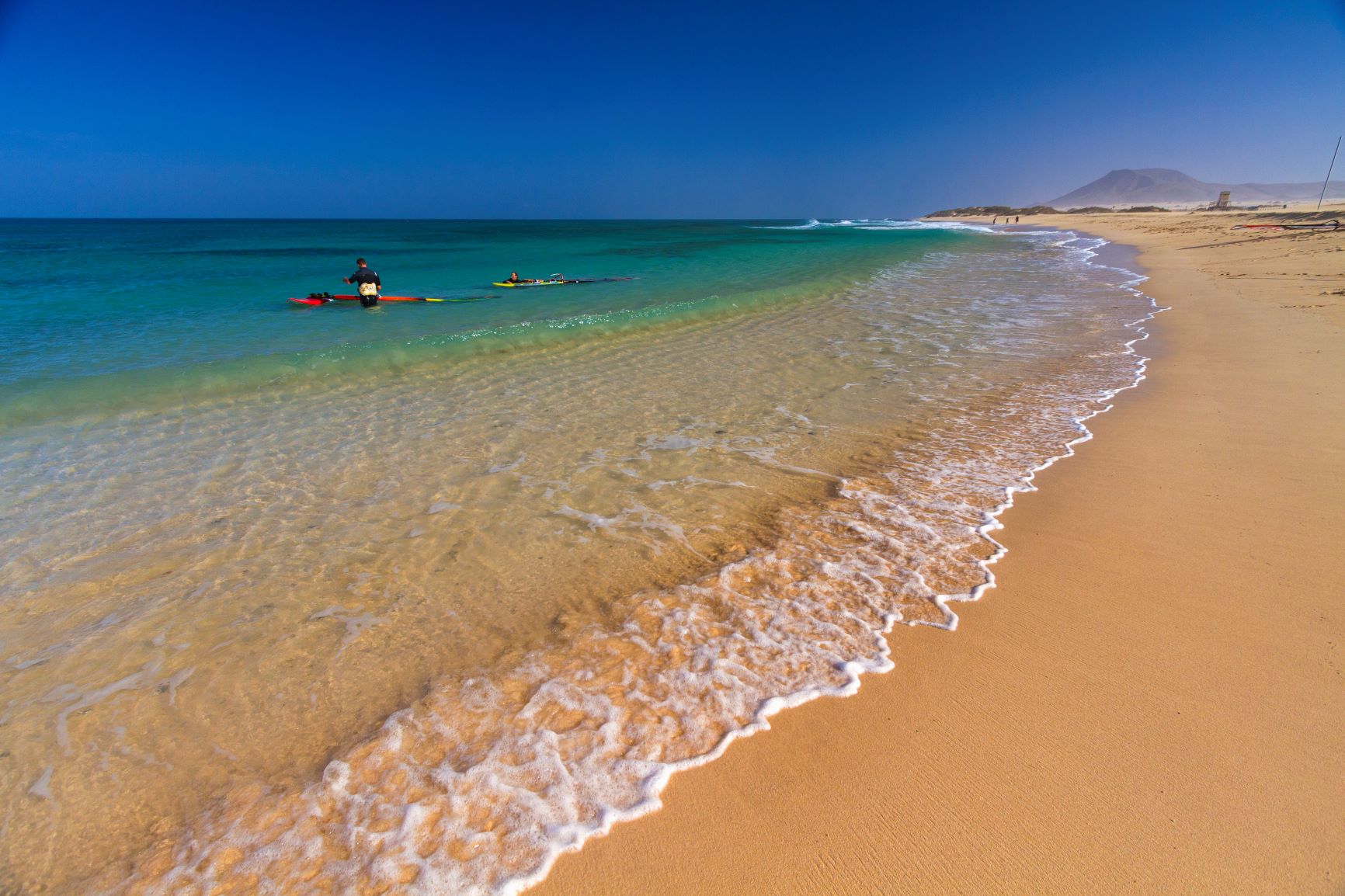 This is an area where the turquoise waters lap a coast covered by fine white sand formed naturally from the erosion of seashells.

Excellent for exfoliation, this form of sand has made these beaches an authentic natural spa, with views of the islands of Los Lobos and Lanzarote. 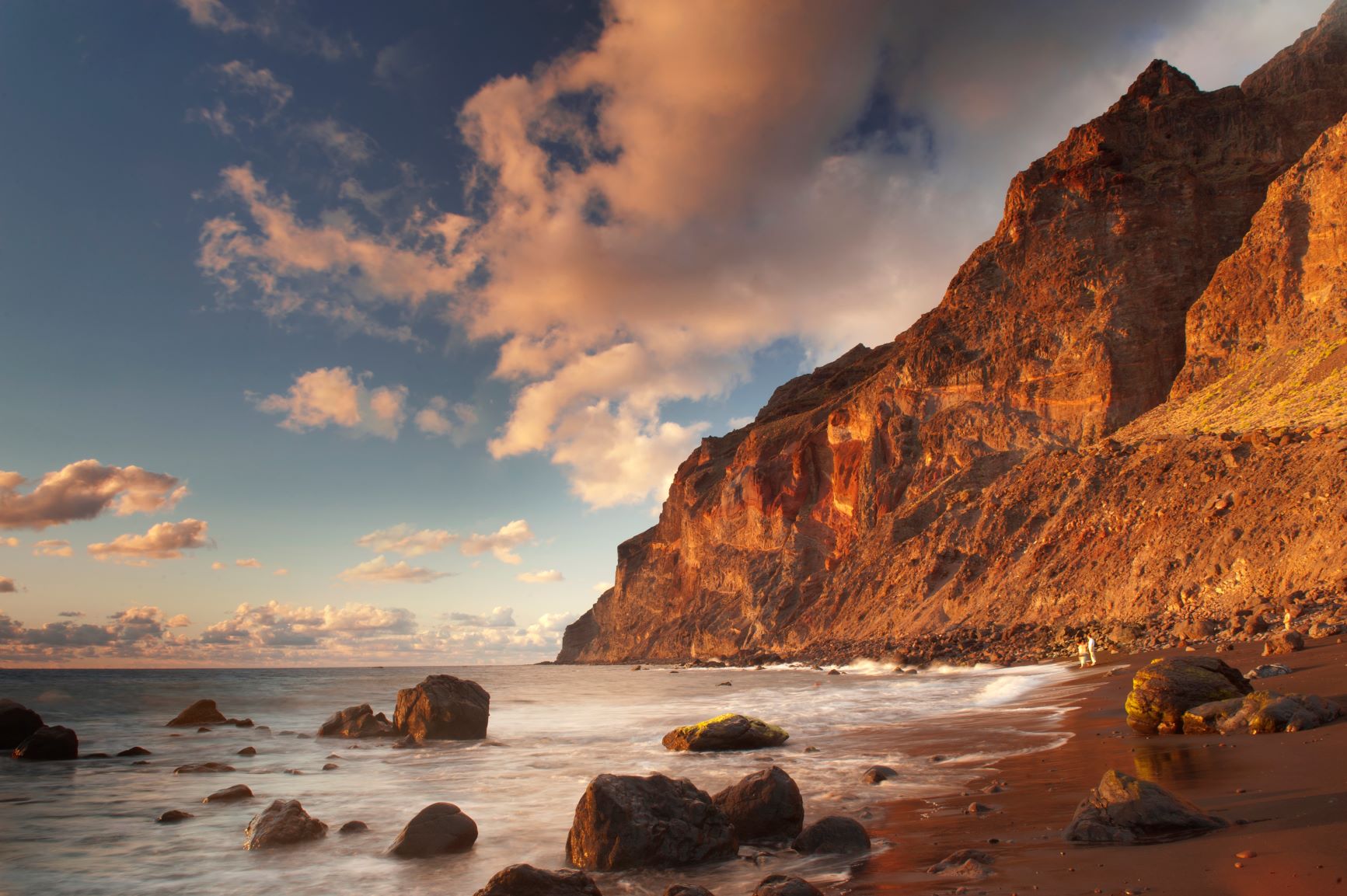 Since the seventies, Playa del Inglés in La Gomera has been a legendary destination for ‘hippy’ and alternative movements.

Unlike other naturist beaches in the Canary Islands, this destination is close to restaurants, entertainment and other services.

It’s also just a short walk to the volcanic sand where one can relax and take in the views of the mountains and the endless ocean. 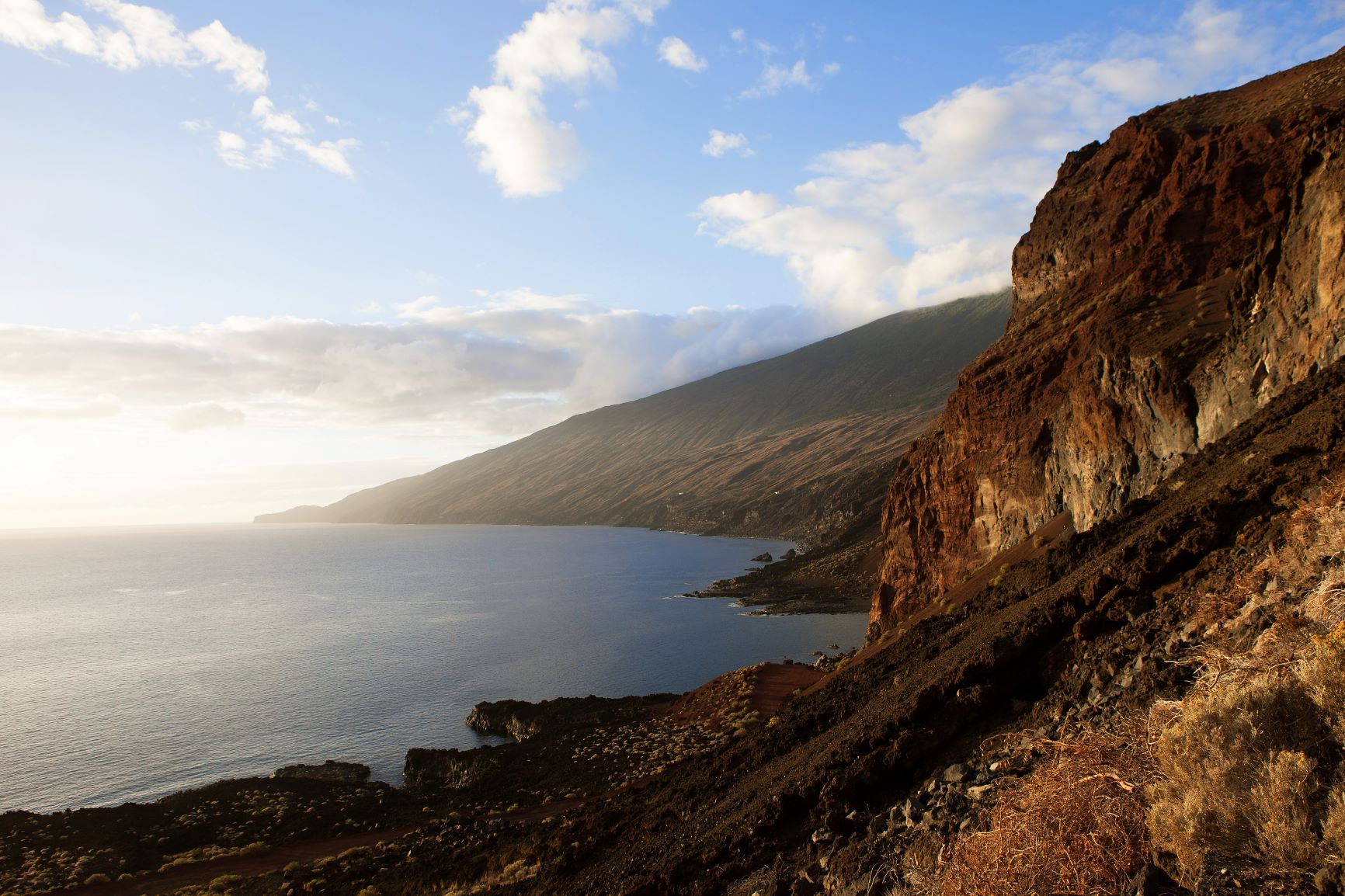 El Hierro is one of the Canaries’ most valuable treasures and the full potential of the island really can’t be appreciated without stopping by Tacoron Cove.

Despite its small size, in the south of the island, the cove is a veritable gem and deserves to be visited year round in order to enjoy the most peaceful Atlantic waters in the entire region.

Famed for being simply unforgettable, this is a totally unspoilt destination with soft, multi-coloured sands, perfect for a relaxing day. 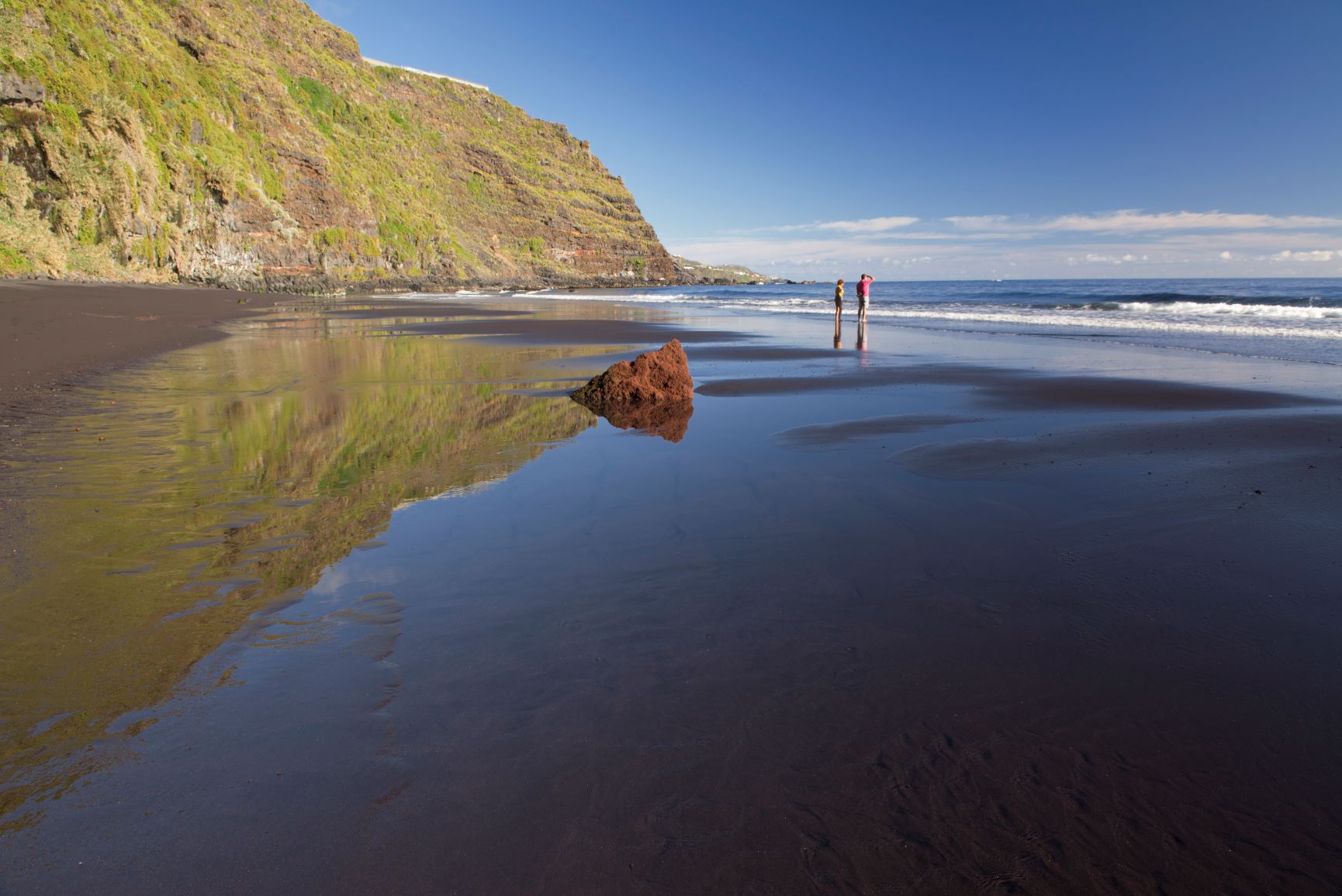 Nogales Beach is one of the best in La Palma. It truly epitomizes what this beautiful island has to offer: mountains, trails, lava, ocean and lush green landscapes.

Located in the northern town of Puntallana, its black volcanic sand, its spectacular cliffs and the mighty Atlantic have put it on the map; not only for surfers and naturists but also for lovers of solitude, beautiful views and nature trails. 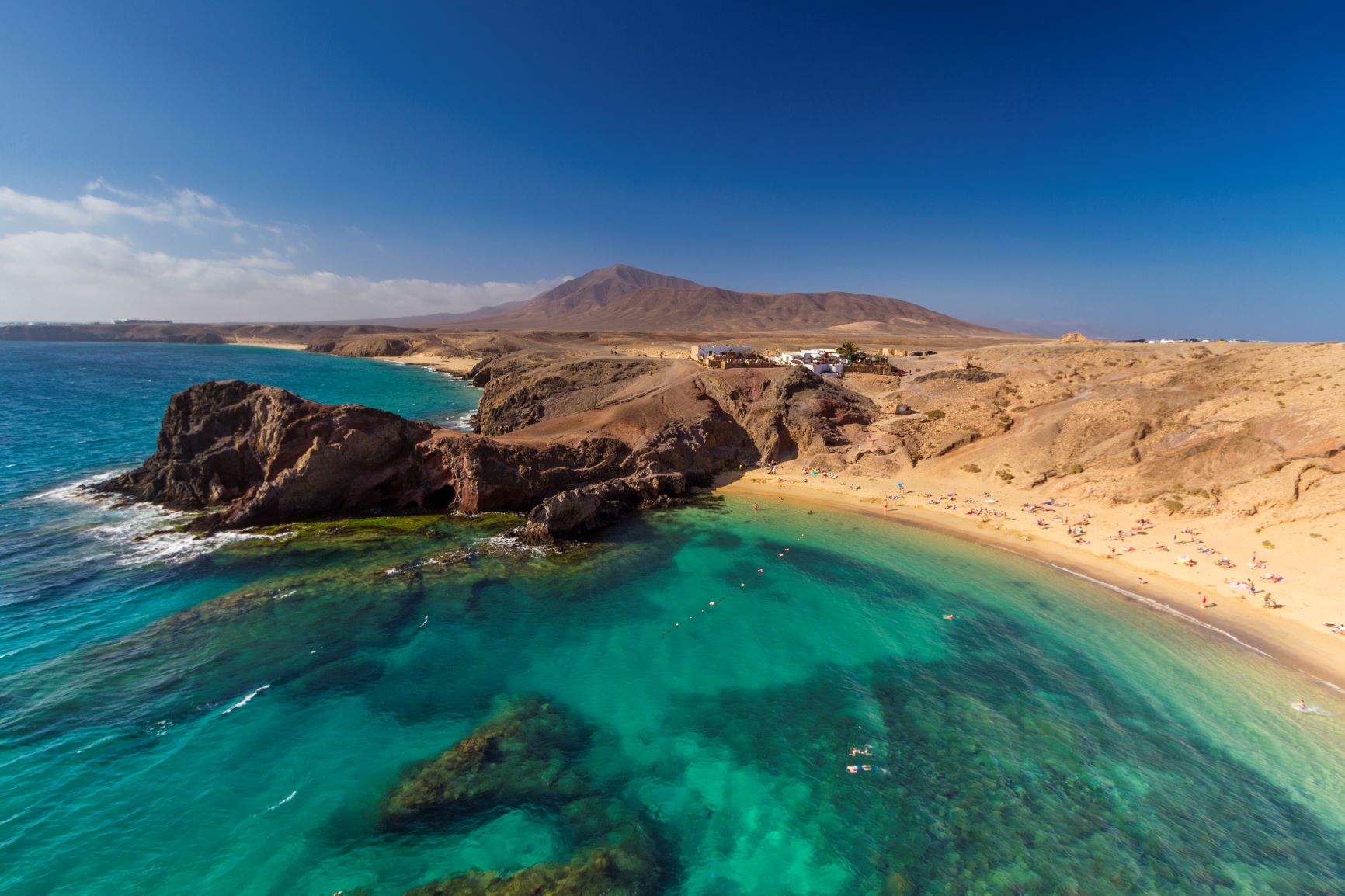 In the south of Lanzarote is one of the most popular beaches on the island: Papagayo, a cove of white sand, reduced size and great beauty.

In the shape of a bay or shell (locals prefer to call it the latter), Papagayo will win you over with its crystal clear, emerald green water which remains still all day long.

It’s perfect for taking up snorkelling and for enjoying the beauty of its depths. You can even let the children have a splash around without any hesitation. 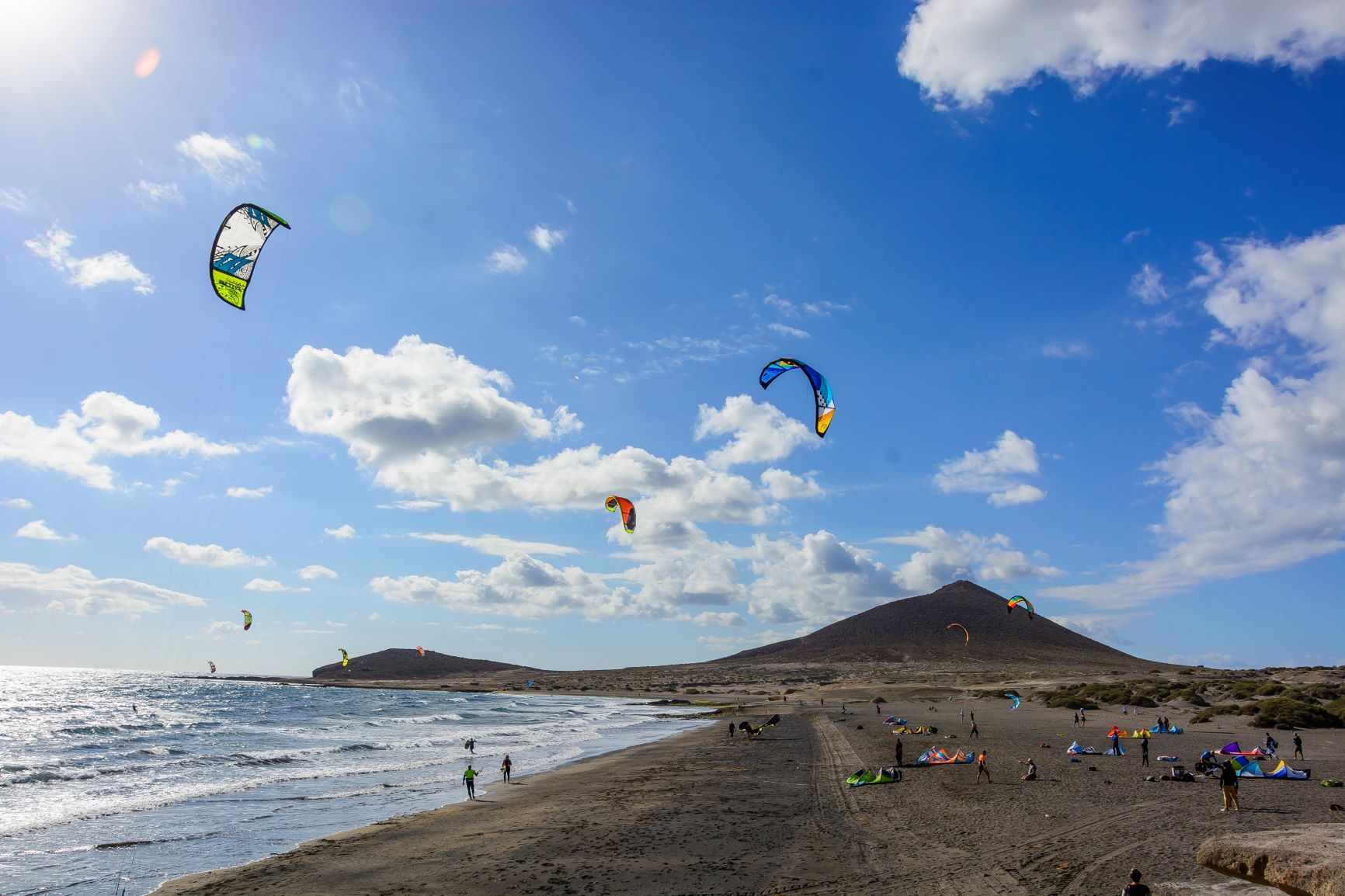 In the south of Tenerife you’ll find one of the local residents’ favourite beaches on the island: El Médano, a beach of golden sand, shallow waters and moderate waves with all the necessary services an urban beach requires.

Over time, the centre of El Médano has become an important second home base for many islanders and is a hugely popular spot for wind and kitesurfing due to the constant winds. 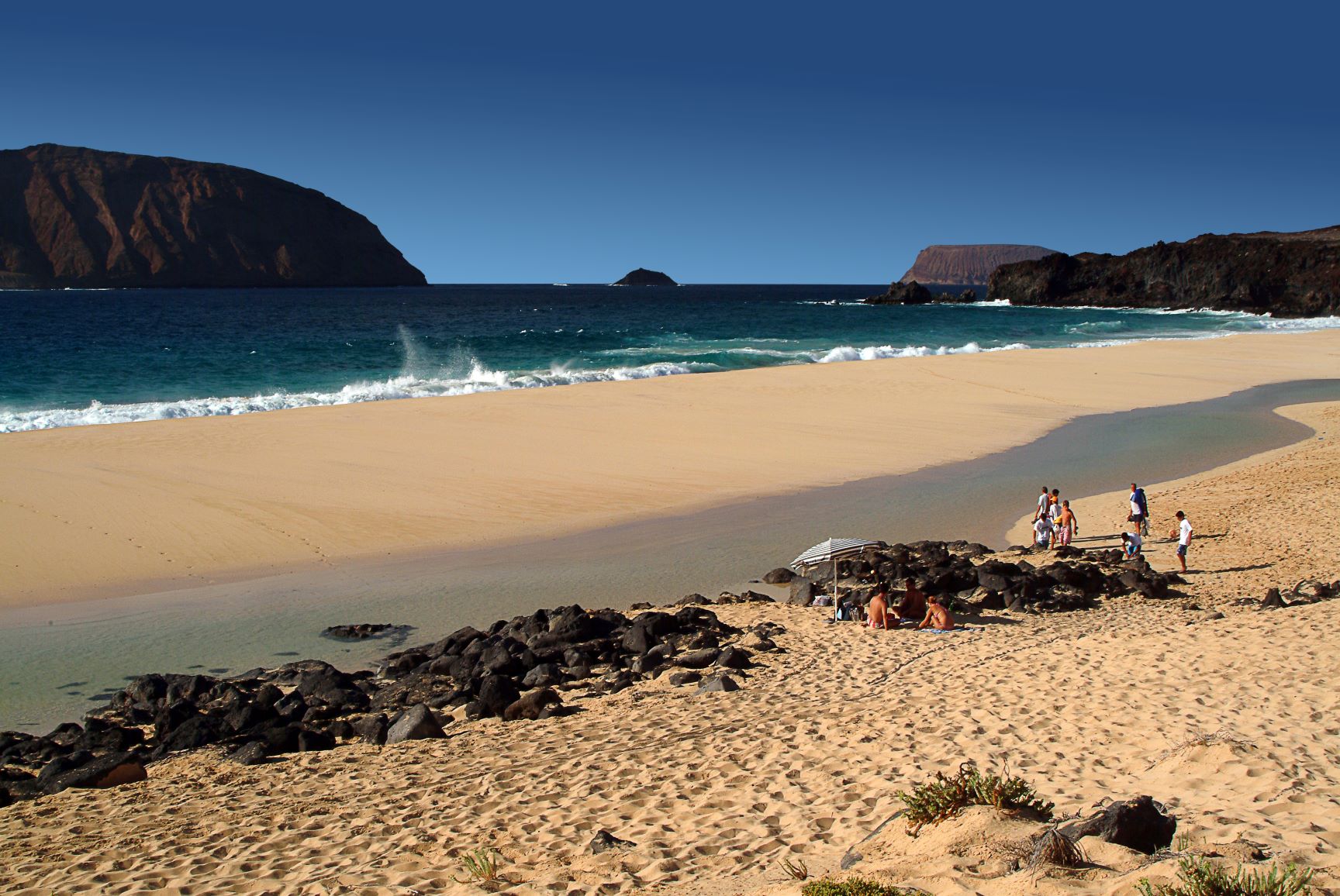 La Graciosa, just next to Lanzarote, is the least populated of the Canary Islands. It is a real treasure hidden away in the northeast.

This pale sandy beach has an ever-changing crystal-clear ocean and some of the most unique scenes in the Canaries. 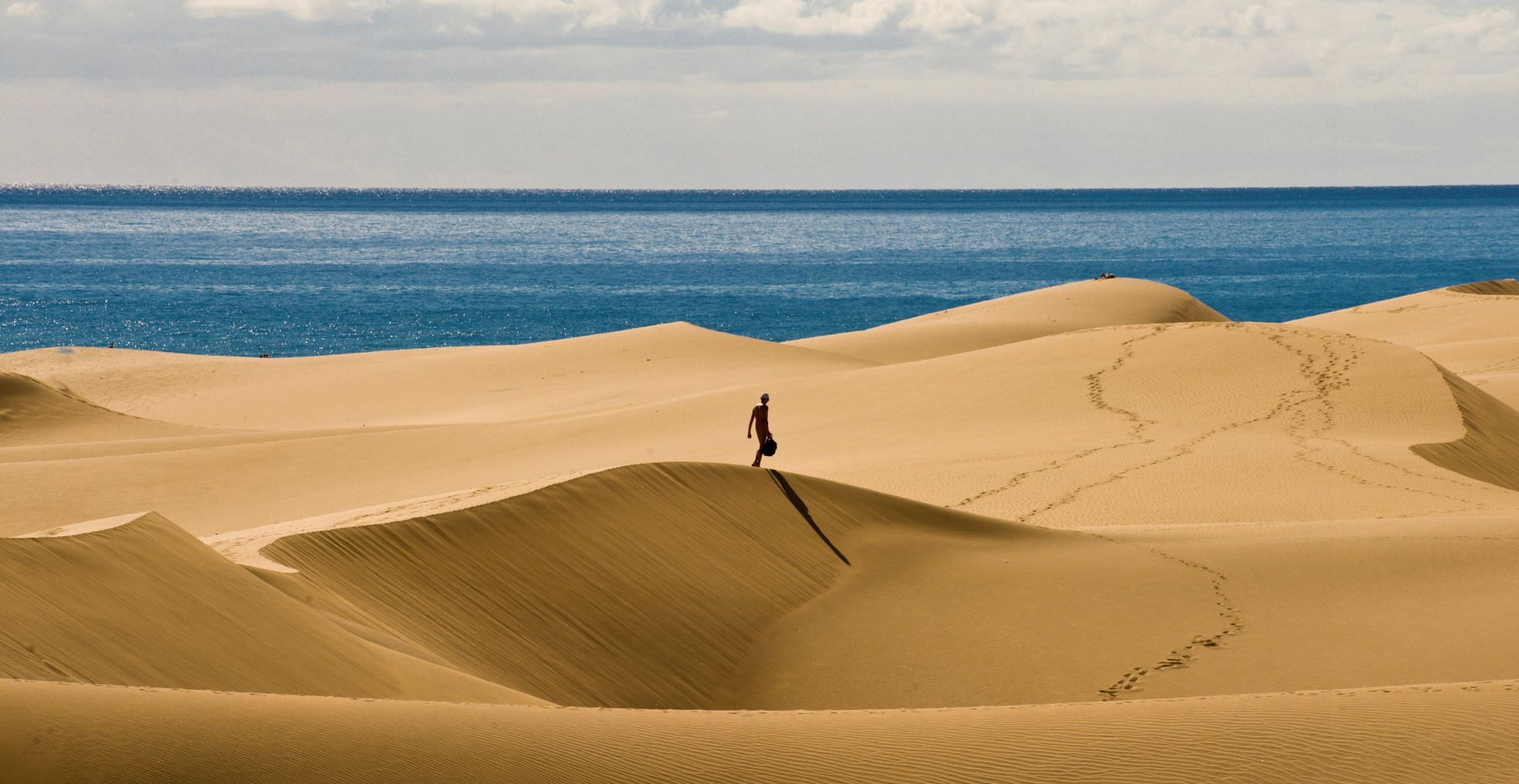 With calm seas and three kilometres of golden sand, Maspalomas is an ideal family destination and the perfect place to spend days in the sunshine.

For a romantic experience head to the dunes in the evening and watch the sun set behind Maspalomas lighthouse. 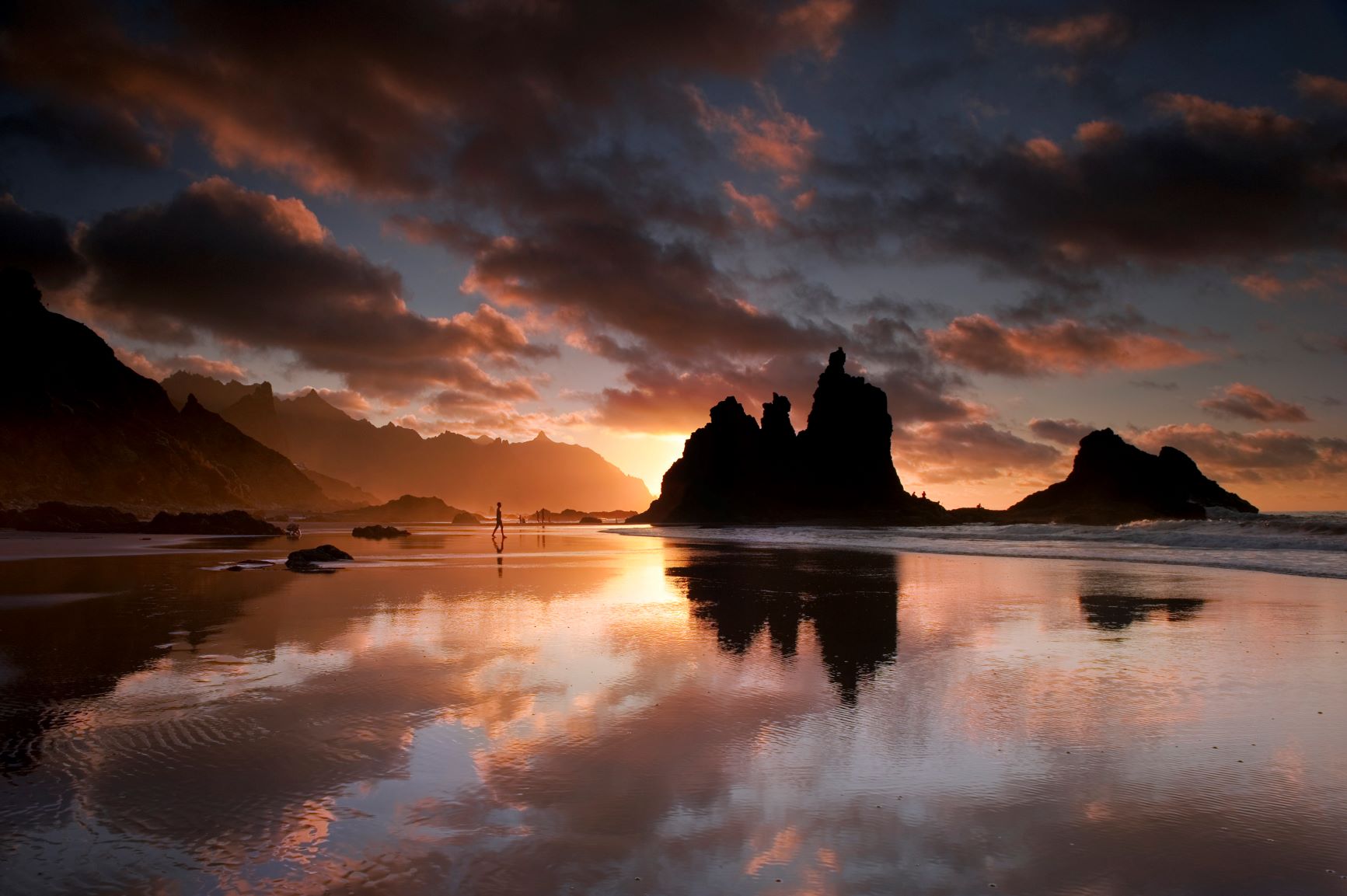 The solitude and serenity of Benijo beach and its stunning location make it a perfect spot to visit when it comes to alternative beach experiences in Tenerife.

Located in Anaga Rural Park (Parque Rural de Anaga) in the north-east of the island, Benijo is found at the end of a road that winds its way through a laurisilva forest with spectacular views over the Atlantic.